Your Internet browser may be incompatible with this HTML5 website. please use a more recent browser version

POISONING THE WELL? NESTLÉ ACCUSED OF EXPLOITING WATER SUPPLIES FOR BOTTLED BRANDSA new documentary film takes food giant Nestlé to task for its water bottling practices. Critics say the multinational is busy extracting ground water for its bottled brands and leaving locals, often in poor corners of the world, with the dirty remains.

ZURICH - In the small Pakistani community of Bhati Dilwan, a former village councilor says children are being sickened by filthy water. Who's to blame? He says it's bottled water-maker Nestlé, which dug a deep well that is depriving locals of potable water. “The water is not only very dirty, but the water level sank from 100 to 300 to 400 feet,” Dilwan says.

The testimony is a key moment in the new documentary film “Bottled Life” by Swiss filmmaker Urs Schnell and journalist Res Gehriger. The film opens in Swiss theaters on Jan. 26. The village councilor interviewed in the film says Nestlé refused the village’s request for clean water to be piped in.

The notoriously bad drinking water in Pakistan and elsewhere is the reason for the success of the Pure Life brand. A good 10 years ago, the Swiss food company began adding minerals to ground water and bottling it. Today, Pure Life Purified Water Enhanced With Minerals is the largest water brand in the world – “a jewel in our portfolio,” according to John Harris, head of Nestlé Waters.

In view of the fact that every day more children die from drinking dirty water than AIDS, war, traffic accidents and malaria put together, Maude Barlow, a former UN chief advisor for water issues, states: “When a company like Nestlé comes along and says, Pure Life is the answer, we’re selling you your own ground water while nothing comes out of your faucets anymore or if it does it’s undrinkable – that’s more than irresponsible, that’s practically a criminal act.”

In response to questions put to it by Tages Anzeiger, Nestlé communicated in writing that it had built two water filtering facilities that were providing over 10,000 people in Pakistan’s Sheikhupura with clean drinking water. Construction of a further facility was planned for 2012. The company said they had also built two schools in Sheikhupura.

Nestlé is not the only company to create a huge business with big profit potential by bottling ground water -- Danone and Coca-Cola do it too. However, the way Nestlé goes about it, as depicted in the film, is in stark contrast to the image the company seeks to project. Nestlé likes to see itself as a global problem solver out not only for profits but to “create shared values.” In 2007, when Schnell and Gehriger began working on the movie, then Nestlé spokesman François-Xavier Perroud called it "the wrong film at the wrong time." Several times between 2007 and 2009 the company denined requests for interviews with company managers. It also refused to allow visits to bottling facilities.

The company’s present spokesperson, Melanie Kohli, told the Tages Anzeiger that Nestlé had reached the conclusion that the project would reflect a one-sided and unfair view of company activity and those who worked for Nestlé. “Consequently, we declined to work with the filmmakers. Our carefully considered decision was the right one at the time.”

Tracking the company's record, from Ethiopia to Nigeria

Undeterred, journalist Gehriger visited a refugee camp in Ethiopia where, in 2003, Nestlé had installed a water treatment facility for $750,000. Two years later, the company pulled out. Since then the facility has not been functioning properly, and water shortages have returned.

In Lagos, Nigeria, Gehriger discovered that families have to spend up to half their household budget on water in canisters, and that only those who can afford it drink Pure Life. Then there are the communities in the U.S. state of Maine who are fighting Nestlé because it pumps ground water and spring water in huge quantities – which it can do legally: whoever owns land can pump as much water as they like.

Nestlé pumps several million cubic meters annually and transports the water in tanker trucks to bottling plants. “They’re using our water to make profits, a litre doesn’t even cost them a cent,” one woman complains. “They’re selling the water we use to flush toilets and wash our hands as expensive spring water,” says another. But since Nestlé brings the communities tax dollars, officials welcome the company, which is supported by an armada of lawyers and PR people. 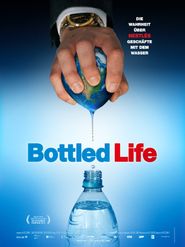